Don’t (P)underestimate the Power of Puns in Marketing

I love a good pun—ask anyone on my team. I think it all started when I was a kid and went to a neighborhood birthday party where the magician’s stage name was “Justin Time.” Anyway…because of my affinity for wordplay, it seems marketing was the right career path for me. Puns have had a long-standing presence in marketing campaigns and, lately, it’s made me wonder why.

Puns are often crudely labeled as “dad-jokes”—maxing out the cheese-o-meter—so why are marketing teams using them in their campaigns? They can’t be as bad as some people think. In fact, if they’re being used to attract and retain customers, they must be appealing on some level.

Yes, some…okay…a lot of…fine…most puns elicit headache-inducing eyerolls, but you have to admit, there’s something a little special about the clever nature of a well-crafted pun, right? No? Just me? Alright, well, if you’re not of the same mindset, hopefully I can convince you of the magic of a proper pun.

Disclaimer: If you’re not a pun fan, you may want to head out now because, without puns scattered throughout, this post would be like a pencil with two erasers—pointless.

In an interview with NPR (aptly titled “Not Jest for Pun”), John Pollack, author of The Pun Also Rises, says, “A pun is notoriously difficult to define, but it’s a type of wordplay, and it takes many different forms…The most common type of pun is the humorous use of a word in such a way that because of its sound, you can interpret it in more than one way.”

Puns aren’t new, either. Shakespeare was a fan of the well-crafted pun. In Romeo and Juliet, for example, after Mercutio was fatally stabbed, he remarks, “Ask for me tomorrow, and you shall find me a grave man.”

This is exactly what John Pollack is talking about when he mentions more than one interpretation of a word. It’s on the reader to dig deeper and find the buried meanings. (See what I did there?)

Because puns have multiple meanings layered into quick quips, the audience has to pause to fully understand the joke. Maybe they even read it twice. Then, once it clicks, it’s like they’ve been let in on a secret—they’re in the know. Puns have the ability to say more with less and be thought-provoking, making them perfect for attention-grabbing marketing.

Puns are funny. Maybe not gut-busting funny, but they’ll at least garner a chuckle or two. But does this chuckle really help you achieve your marketing goals? According to The CMO’s Guide to Using Humor in Marketing from Forbes, there are four key benefits to adding humor to your marketing campaigns:

Happiness is an emotion, after all, and emotions can be powerful tools when it comes to marketing.

As Instapage says, “Neuro-imagery scans show that when consumers evaluate brands, they use their emotions, based on personal feeling and experiences, rather than information about the brand, such as features and facts.” This is the case for all emotions, not just happiness. You can probably recall a marketing campaign that tugged on your heartstrings (a strategy Forbes calls, “Sadvertising”) just as easily as you can recall one that made you laugh.

Using humor in marketing connects to each customer and makes them feel which, in turn, creates more stickiness and helps them remember your brand.

I’ve obviously got to include some heavy-hitters in the marketing and advertising pun world. If nothing else, these will make you smirk and say “hm, clever.”

Lyft, the rideshare app, for example, sent this email out to promote carbon neutrality on Earth Day. They’re telling customers to put their booties on bikes rather than get into a car. But, if you do have to get in a car, you can carpool with others to fill the seats and reduce the number of cars needed. Lyft referred to this as “butt-math.” What got me was the CTA. “But wait, there’s more” is often used in late-night infomercials, but Lyft made it work for them. 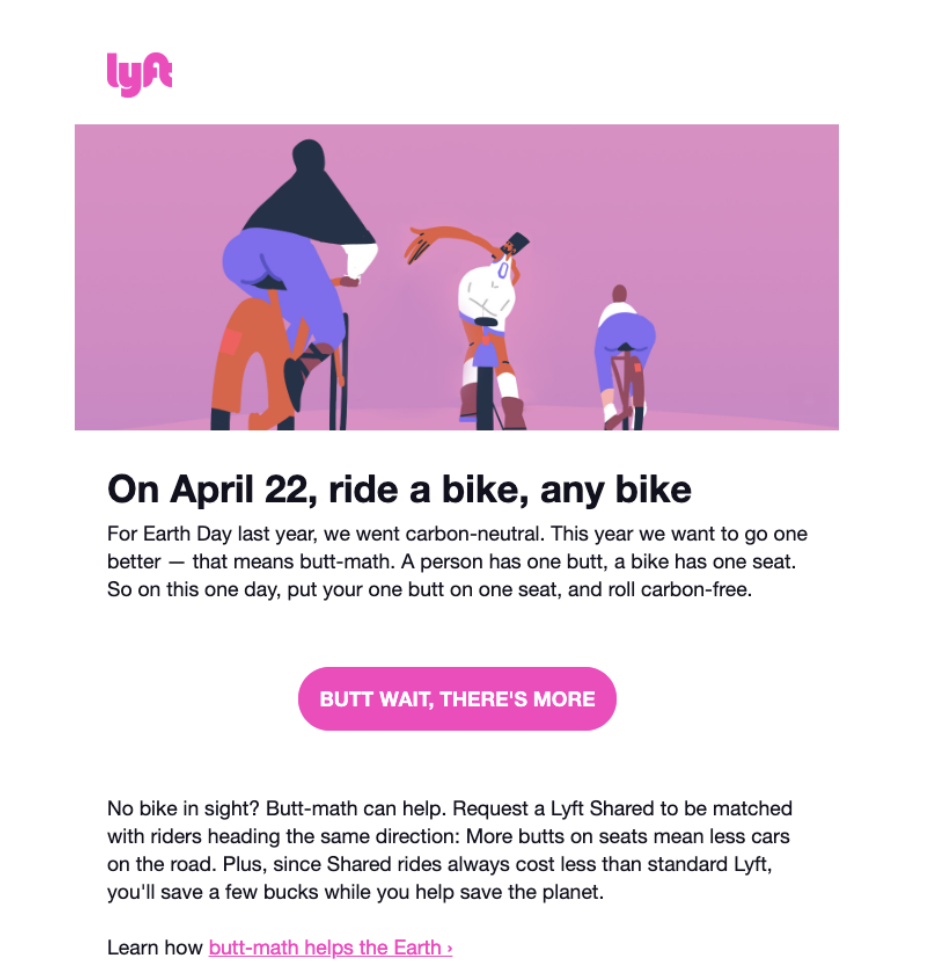 Lyft included a really simple, commonly used marketing phrase, repurposed as a punny CTA to fit the theme of the email. Source: SendGrid.

TunnelBear, a public VPN service, sent this email out on—you guessed it—Cyber Monday. Being a brand with the name “bear” in the title gives you a lot of opportunities to get creative with puns. TunnelBear basically rebranded Cyber Monday to Cybear Monday. Because customers likely get an influx of emails on Cyber Monday, TunnelBear used this as an opportunity to stand out from the pack. Clever, right? 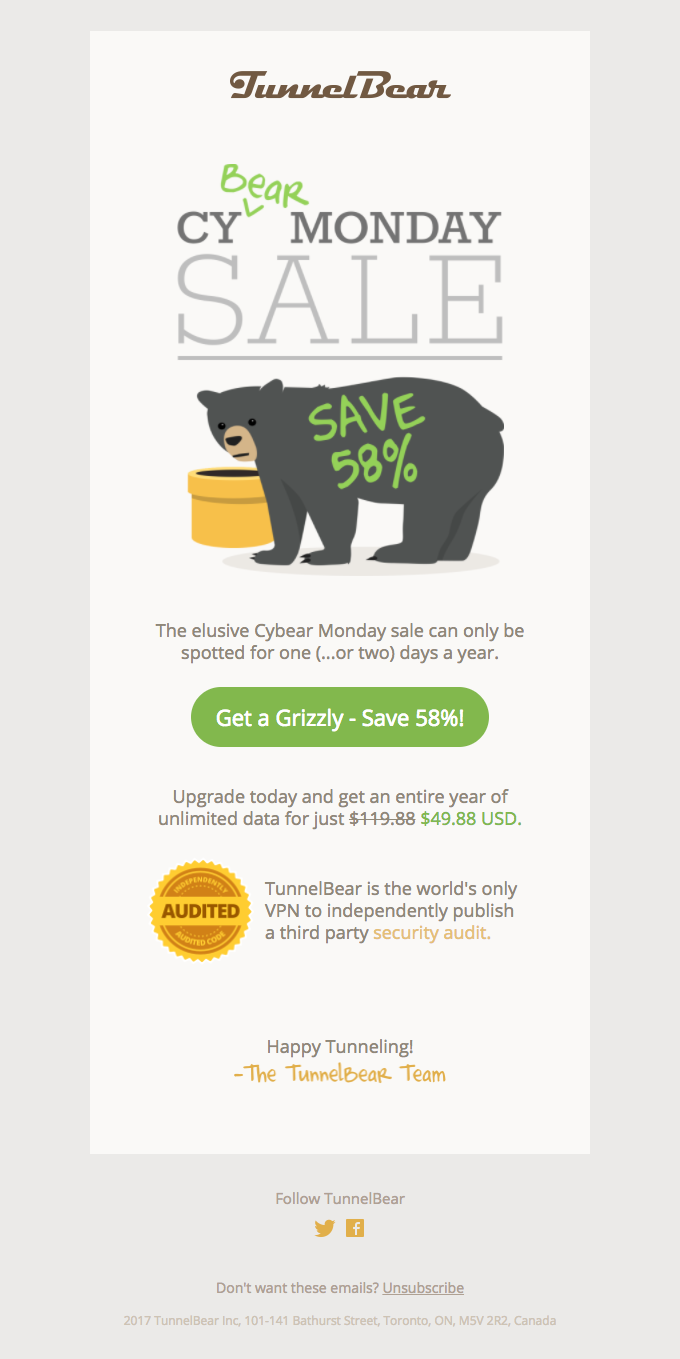 Even the followup copy refers to Cybear Monday as “elusive”—a nod to their bear-centric branding. Bear-y cute. Source: ReallyGoodEmails.

Even the followup copy refers to Cybear Monday as “elusive”—a nod to their bear-centric branding. Bear-y cute. Source: ReallyGoodEmails.

Lastly, we have Bendon Lingerie. This email highlights their briefs, both men’s and women’s, and captures the audience’s attention right off the bat with the bolded headline “Keep It Brief.” A commonly used saying, Bendon is repurposing the phrase to work for their line of clothing. For a lingerie brand, this is a perfect pun. Would I recommend a shorter email, just to play into the pun more? Perhaps. But still, it’s pretty genius.

With this bold and above-the-fold headline, customers immediately know what the email is about but are also drawn in by the pun. Source: Mailcharts.

Puns add just a little more oomph to your emails. The copy creates a memorable experience and the imagery helps drive home the humor. Combining clever copy with a well-designed email not only makes the customer think about (and even potentially share) your messaging, it shows that you, as a brand, took the time to make this a pun-of-a-kind experience for them.

Above all else, marketing is about understanding your target audience. If you’re selling a product or service that has more serious undertones, you may not want to involve wordplay. For example, you’re not seeing Melissa Etheridge toss dog puns into her heartbreaking ASPCA commercials. That would be gauche.

In The CMO’s Guide to Using Humor in Marketing there are also potential downsides to using humor:

The moral of the story: you should always strive to put your customers first. While being clever and including wordplay to elicit happiness can work for some brands, if using puns in marketing doesn’t appeal to your target audience or align with your brand’s style, don’t use them.

To learn more about how your marketing technology can help you appeal to your audience, as individuals, request an Iterable demo today. 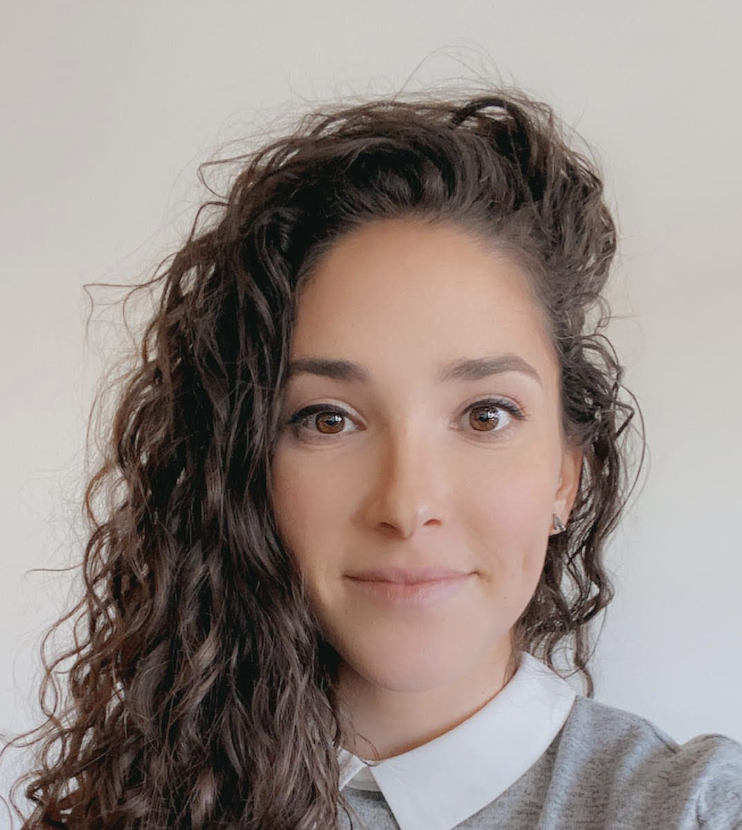 Brooke Grief is a Content Marketing Manager at Iterable. Prior to working at Iterable, Brooke managed content strategy, production, and ideation for a handful of brands, including Aveeno, Planet Fitness, IBM, and GE Healthcare. 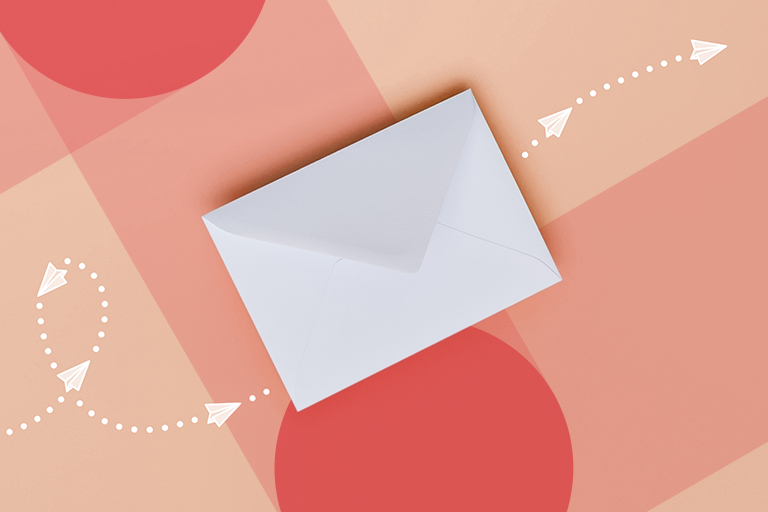 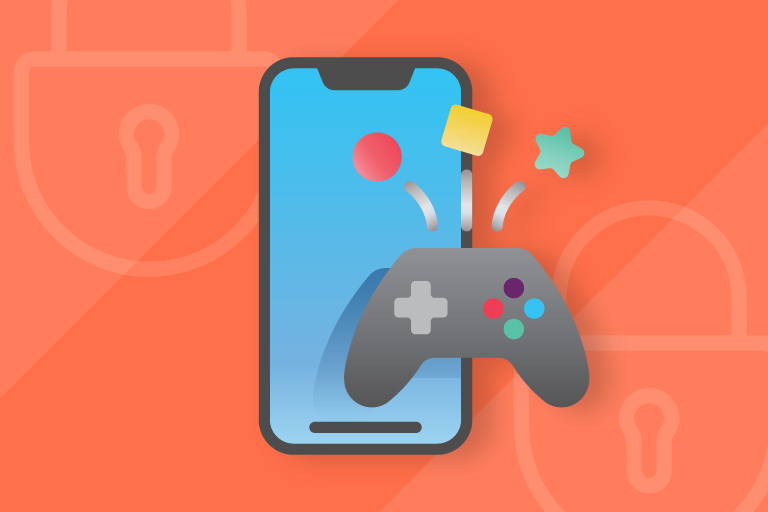