ConsumerAffairs makes it easy for you to pick the best companies for your big purchases. Our in-house research team works closely with industry experts to write our comprehensive buyers guides and how-to articles. We offer hundreds of thousands of consumer reviews and intelligent matching tools that use our proprietary technology to pair users with companies that meet their needs.

I’m a native farm boy from the rural plains of South Dakota. I yearned for a life in the city, and so I started my career in 2006 as a jack-of-all-trades marketing assistant for a recordable media manufacturer in Minneapolis. In 2011, after years of dabbling in every aspect of marketing imaginable, I moved to Austin and took a job with Callaway Golf, where I finally developed an area of specialization—email marketing! My career has now taken me to Tulsa-based ConsumerAffairs, where I work remotely from my new backyard office shed, overseeing email and other consumer-facing marketing communications.

When I’m not strategizing our next email lifecycle flow, I can often be found on the Austin karaoke scene, planning a road trip, or coaching my kids’ Little League teams. I’m a diehard fan of the Minnesota Twins and Los Angeles Chargers—a very rare combo!

My hometown of Carpenter, South Dakota is so small you might drive through it and not even realize it. It’s less than one square city block and is home to 12 people.
At 6’7” I am usually the tallest person in any room. My dad and brother are only 5’9”, so I get a lot of questions.
I once won a talent show for doing spot-on voices of many Sesame Street characters—Big Bird, Oscar, Elmo, Ernie, Bert, Grover, Cookie Monster, and others. 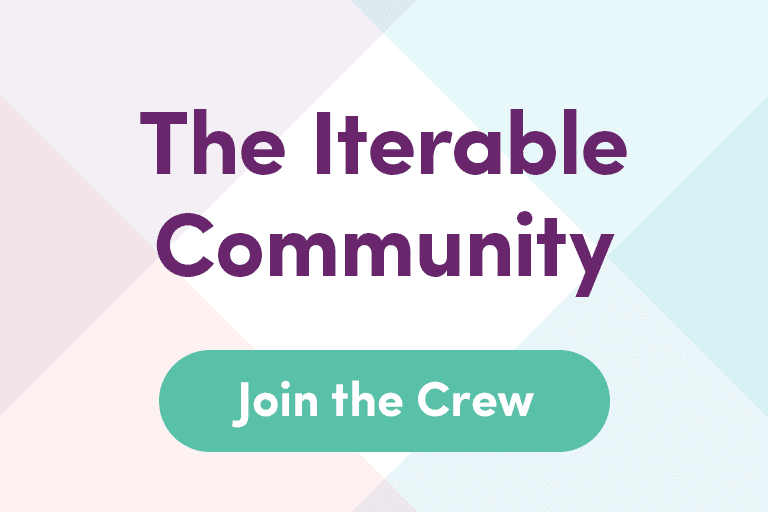 After moving to Iterable, our email program grew exponentially within a few months. A business can’t grow if its software is holding it back!

What does a typical day look like for you?

My day begins at 8 am, or whenever I get back from taking kids to school and daycare. After warming up my brain with coffee, Wordle and WARdle (the baseball version), I spend the first hour of my day organizing my team’s daily tasks and assignments and analyzing the previous day’s performance. The late morning is when I get in the zone and dig deep into my own projects—usually setting up or fine-tuning a new customer lifecycle journey or campaign. I may be the manager, but I still am in the weeds with the team doing some building! After a lunch break and workout, my schedule is typically full of meetings with my manager or other teams—Product, Marketplace, Engineering, and others—to discuss one of many new initiatives that will in some way involve email, whether it’s a new way of sending data, an emerging category that needs an email solution, or the next step of a long-term project. The late afternoon is usually spent on data and analytics, strategy, QAing email campaigns built by my team, or list hygiene.

When and how did you get your start in marketing?

When I graduated from Dakota State University in 2005 with degrees in Web Development and Graphic Design, there were a number of businesses in many different industries I could have landed. I could have easily been hired on a front-end development team, art department, or marketing firm. I really had no idea where it would take me. As it turned out, my job search lasted mere days, as I landed an entry-level job at a small Minneapolis-area company that produced computer equipment. The Director of Marketing needed an assistant to execute all of his ideas and initiatives. I was hired on Christmas Eve 2005, and thus began my marketing career! As a two-person team, I had to do virtually everything marketing-related, from email marketing to trade show planning to designing magazine ads and producing product demo videos. Most tasks certainly utilized my web development and graphic design abilities, so it was a good fit for me.

What’s a mistake you’ve made at work, and how did you deal with it?

I was attempting to redesign an email, and accidentally edited a live campaign that was in the process of being sent to about 250,000 subscribers. I thought I had been editing a copy of the campaign and had stripped about two-thirds of the email out as I reworked the design! What remained was one sentence, one graphic, and one button. But it was too late; it couldn’t be undone, and the send was nearly complete. I was preparing to send an “oops” email, but to my surprise, the highly truncated campaign was outperforming the full version from previous sends, and it wasn’t close! In its shortened state, it had made its way into the Gmail Primary tab for most users, and wound up with way more engagement than ever before. I learned a few lessons. First, obviously, be certain not to edit a live campaign again. Secondly, though, it stressed the importance of testing. I had accepted that campaign as being “good enough”, and it was a wake-up call to be more rigorous with all sorts of experiments.

What is one piece of advice that you would give to a new Iterable user?

Don’t overlook the catalog and collections features. We have an incredible amount of data stored in about a dozen different catalogs that really make our jobs easier. I have a catalog dedicated solely to pulling in product or brand reviews dynamically. I have a collection that can drop the top 3 brands in a given category into an email depending on the consumer’s interests and activity. It’s very powerful and pretty easy to implement. I feel like most other Iterable users I’ve met don’t take advantage of this feature to the fullest, if at all.

What are some brands that you admire for their standout marketing?

I think the only brand whose emails I open 100% of the time (outside of my own) is HatClub. They do such a great job coming up with new themes for unusual baseball caps. They clearly go to great lengths with their product photography. I look at the emails and think to myself, “I want to be one of those cool dudes standing on a street corner with a pastel yellow and pink Minnesota Twins hat!” I get dangerously close to buying lots of $50 caps, and it’s because of effective marketing. Another brand that I surprisingly like for a different reason is T-Mobile. I like how they pretty much own that bright pink color and lean completely into it at every turn. If, as a marketer, you can have consumers think of your brand with the mere sight of a color, then hats off to you. I know that’s true whenever I see bright pink, and I sure can’t say the same about any other colors!

What challenges and/or problems was your team experiencing prior to Iterable? How does Iterable solve for these?

Oh, where to begin! Our previous ESP was egregiously slow, for starters. To segment a list and receive a count would take over 10 minutes after hitting ‘submit’, whereas it’s pretty much instantaneous on Iterable. They had no solution for creating a piece of content and inserting it into various campaigns; Iterable of course answers that with snippets. There was no way to utilize RSS, or send recurring campaigns. Our account rep was unresponsive, and their support team was rarely helpful. It was fine for a small business, perhaps, but the ESP was the biggest thing holding us back from growth. The time wasted on making the ESP do its job was at a breaking point. We needed a new solution if our program was ever going to get to the next level. We demoed a half-dozen ESPs and Iterable really checked every box for us. I liked how intuitive everything was. The UI was sleek and easy to navigate. And of course everything was so fast! After moving to Iterable, our email program grew exponentially within a few months. A business can’t grow if its software is holding it back!

If one song could play every time you entered a meeting, what would it be?

“Bat Out of Hell” by Meat Loaf (RIP). That opening piano riff would really get the meeting hopping! I actually did this once at a past job where I played intro music as people entered the building and announced them as if it were a basketball starting lineup! People weren’t terribly amused at 8:30am.

If you came with a warning label, what would it say? (ex: you’re a fast talker, you’re highly competitive, you talk about your dog a lot, etc.)

It might say “works best when chilled.” As a native Upper Midwesterner now residing in central Texas, heat and I do not get along very well. If the temp is over 80, I’m usually burrowed indoors with the blinds closed and AC cranked, or I’ll be a sweaty mess. Whenever I see a TV show or movie where the character is wearing a coat, I remark to my wife how nice it would be to feel chilly, and get wistful for the very cold weather that led us to move to Texas in the first place!

I cannot imagine doing this work without the incredible colleagues and leaders I work with daily; there’s no software on Earth that can replace a creative, well-calibrated, and determined team. I feel incredibly lucky to work with these folks.
Carolyn Dorant

I love using Iterable because it’s flexible and evolves with your brand. The intuitive user interface makes it so easy to create and manage A/B tests for campaigns and workflows, and the personalization capabilities (e.g., using custom events and handlebars) have opened new doors for our marketing campaigns.
Sara Yamamoto

I passionately believe that the single most critical aspect of marketing is staying in-touch with customers. Seeing out-of-touch marketing is something to which I (and most) have a visceral, negative reaction, which is, of course, massively frustrating. There is no amount of discount, quippy copy, or sophisticated automation that can save a brand when it is perceived as out-of-touch by those it serves. How can you avoid this pitfall? Easy. TALK TO YOUR CUSTOMERS! This exercise is NOT just for your product team.
Patrick Mackie

Director of Marketing, Lifecycle   @Made Renovation

Loyalty in any relationship is built on a foundation of trust, which comes from an awful lot of listening. Our goal at Framer is to build something that helps teams create truly interactive, engaging prototypes, but we can’t do that without understanding their pain points and use cases. We need that critical feedback loop, and Iterable gives us the ability to effectively listen, learn, and adapt quickly to serve our audience better.
Kait Creamer